For a long time, bowlers have often played bowling as a way to entertain and relax, but few people know that this is a sport that brings a lot of health benefits to both children and adults.

As one of the world's first sports

Evidence from archaeologists shows that bowling appeared about 5,000 years ago. This makes bowling one of the oldest sports in the world, dating back to the time of ancient Egyptian civilization.

Initially, bowling was played with the 9 ky (kegel – wooden bottle) rule. Later, the rules of the game changed to 10 ky bowling and have been maintained to this day.

Before that, most bowling balls were made of wood, which was highly appreciated for its durability and light weight. However, the wooden balls do not have the bounce like the balls we use today.

Rubber bowling balls first hit the market in 1905 and were immediately popular. In 1914, a special rubber-plastic compound was used to create bowling balls. This compound, called Mineralite, is used to make the ball roll faster and more accurate. This also created new pitching techniques and many of them are still in use today.

While most recreational sports are not for the elderly, bowling can perform very well in the elderly.

1. It's an exercise for muscles

Merely walking along the ice lanes while hitting the kyat is enough to exercise the muscles in your legs. It is like a "walking exercise", at the same time there is movement of both hands (when holding the ball) and concentration of the whole body when it is necessary to finish bowling. This helps muscle groups that are rarely exercised to also participate.
A dribble is a complete exercise where the player swings with the involvement of tendons, joints, ligaments and muscles in the arm helping to increase muscle growth and promote total flexibility. body. 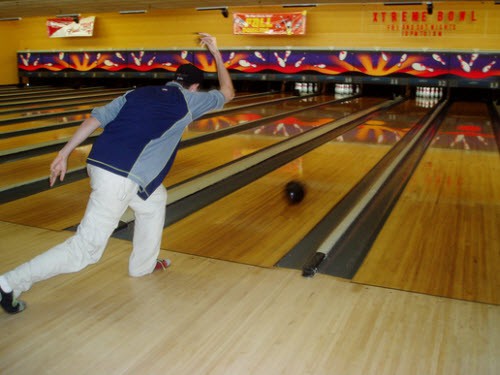 According to the Bowling World Newspaper, in each throw, a normal player swings the bowling ball 360 degrees (200 degrees back and 160 degrees from back to front). In a 3-set match, a player using a 16-pound ball will swing a total of 864 pounds of mass (54 throws multiplied by 16 pounds each). When moving to throw the ball, an average player will move 1.8 meters in each step, after 3 sets, the player will move a total of 960 meters.

The movements that you make while bowling, from running to finishing a dribble, will promote fat burning, promoting balance in the body.

Unlike other sports, instead of TRAIN, bowling is a sport to PLAY. After the pitches, we often see players sharing their emotions with teammates, with viewers and even with opponents with celebratory high fives. The combination of social interaction and muscular activity helps players improve their mood, reduce stress and keep a positive attitude.